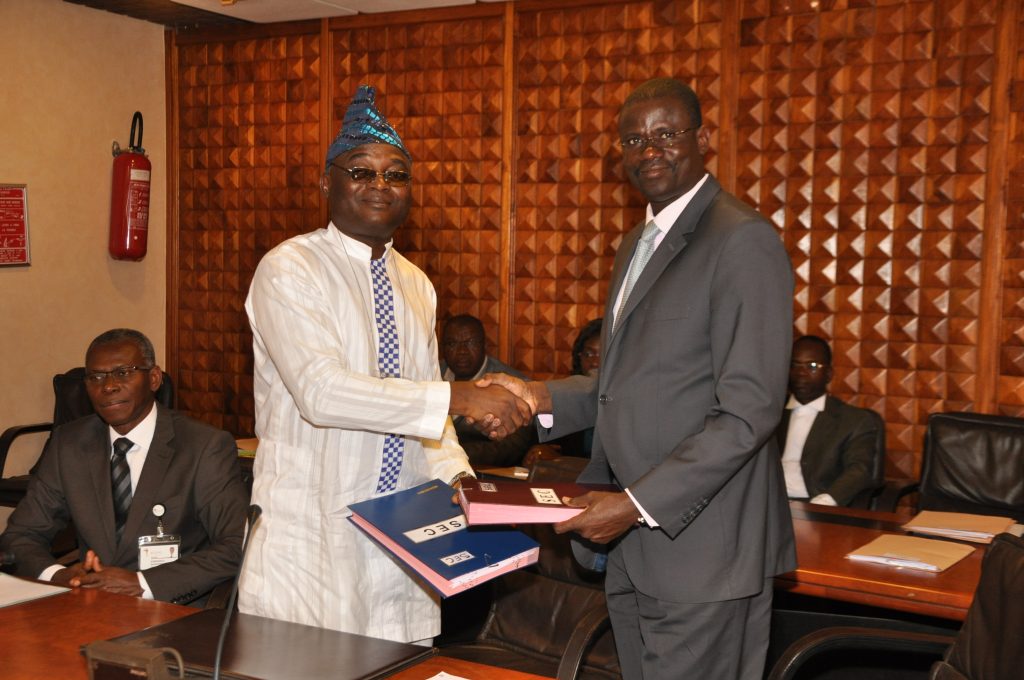 The signage of contracts for data sharing between the Credit Bureau (BIC) of West Africa Monetary Union (WAMU), Creditinfo Volo and 26 Benin institutions, amongst which 15 banks and 11 other large microfinance institutions, represents a very important step in concluding legal proceedings to build a strong financial ecosystem in West Africa. Benin is the final country from the 8 members of the WAMU to enable such information sharing and therefore will contribute in strengthening and increasing the efficiency of credit management in the whole region.

This strategic step was supported by BCEAO National Direction for Benin and involved the presence of the Professional Associations of Banks and Financial Institutions (ABPEF) as well as microfinance institutions (APSFD-Consortium Alafia). The official ceremony was led by Mr. Servais ADJOVI, Chief Officer, representing the Minister of Economy and Finances of Benin, in the presence of Mr. Alain KOMACLO, BCEAO National Director for Benin. The Professional Associations were represented by Mr. Faustin AMOUSSOU, Vice President  of APBEF-Benin, Mr. Emmanuel GAHOU, President of the Consortium ALAFIA. Creditinfo Volo was represented by Managing Director, Mr. Adamou SAMBARE.

Mr. Adamou SAMBARE, stressed the necessity of State implication in contributing to educate the public about the benefits of this new approach. He emphasized the need to involve microfinance institutions to share data and use the value provided by BIC to meet contemporary credit risk management standards. Finally, he highlighted the improved ability of now being able to work more efficiently and consequently, raising the country rating in Doing Business rankings.

Mr. SAMBARE mentioned that counting one year from the beginning of operations, already 1.733.000 loans were uploaded, for a total of 744.000 individuals and 7.000 companies and this number is expected to increase very rapidly.

Creditinfo Volo operates under the decree N° 066/MPMEF/DGTCP/DT from 12th May 2015, issued by the Ministry nearby the Prime Minister in charge of the Economy and Finances of the Ivory Coast, to provide services as Credit Bureau (BIC) in the West Africa Monetary Union (WAMU). The company provides these services under the unique agreement that entitles the company to operate in other countries of the WAMU, where it has its representations.

BIC is an institution that collects positive and negative information on meeting credit requirements from financial, official and private sources. This allows more transparent and objective credit risk assessment and facilitates better access to finance. The establishment of such institutions is necessary in building a solid finance ecosystem and growing a country’s economy.