Hrefna Ösp Sigfinnsdóttir has been appointed as the new CEO of Creditinfo Iceland. She previously held the position of Managing Director of Asset Management and Brokerage at Landsbankinn. She has over 27 years of experience in the finance industry and will bring her wealth of knowledge and expertise to Creditinfo Iceland and the company at large.

‘We warmly welcome Hrefna Ösp to work and we are very happy to have her join us. Hrefna has extensive experience and a clear vision of the functioning of financial markets, which will be a major driver  in moving Creditinfo’s journey forward. Hrefna joins a team of highly motivated staff who are also excited to have her on board’ says Paul Randall, CEO of Creditinfo Group.

“I am especially excited to join Creditinfo. I have followed the company since its establishment and have been a loyal customer. I know that Creditinfo has a very strong team that provides excellent service with powerful solutions. It is exciting to become part of an international ecosystem such as Creditinfo Group which is widespread throughout four continents, I foresee many growth opportunities for me as a professional and Creditinfo Iceland as a team. I am especially keen to further develop and provide solutions the market needs, such as open banking and increased demand for knowledge of customers and the origin of capital” says Hrefna Ösp.

Hrefna holds a Degree in Business Administration from the University of Iceland and a certification exam in securities trading.
She resigned from Landsbankinn this autumn after having been there since 2010. Before that, she worked as a fund manager at Arev Securities Company from 2007. She also worked as the Director of the Listing Division and as an expert on the same at the Iceland Stock Exchange from 1998-2006. Hrefna previously worked as the Director of Personal Services at Fjárvangur and was also an employee of the Central Bank of Iceland’s Monetary Policy Department.

Hrefna has also served on the boards of several companies both in Iceland and abroad and is also one of the founding members of IcelandSIF, an independent forum for discussion and education on responsible and sustainable investments.

The Creditinfo Team welcomes Hrefna and is looking forward to start collaborating with her. 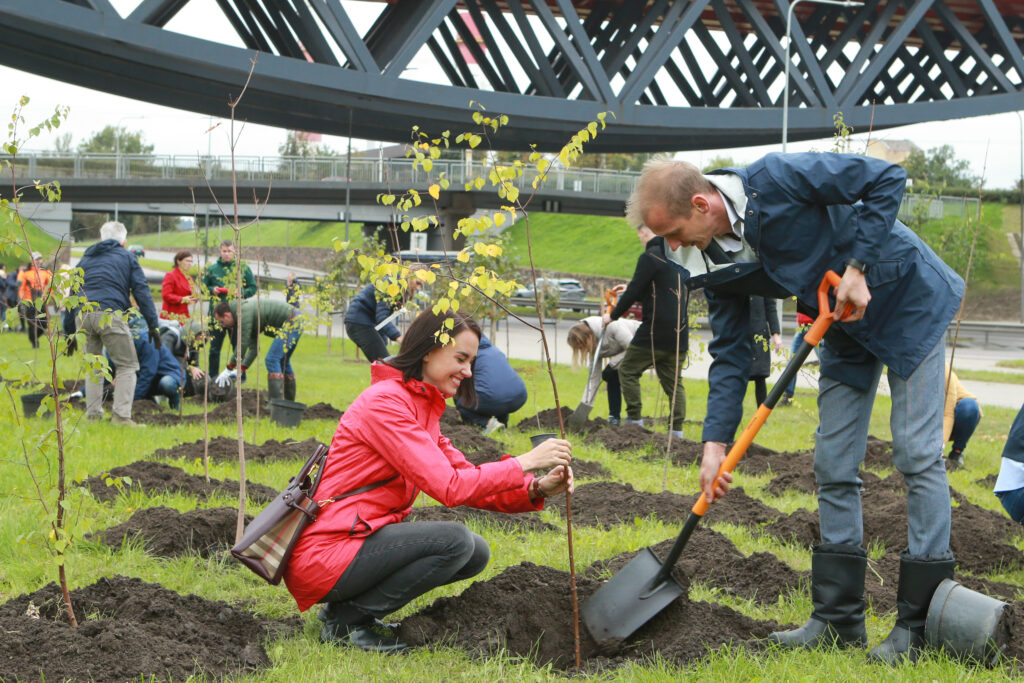 At a busy Vilnius roundabout, a park of the Strongest in Lithuania was planted

In one of the busiest parts of Vilnius, at Gerosios Vilties roundabout, more than two hundred trees were planted on 17th September 2021, forming a new park for the “Strongest In Lithuania”. Creditinfo Lithuania invited several companies to join the initiative for a greener Lithuania.

“This year we decided to add something new to the name of the “Strongest in Lithuania” – to match every certificate of the Strongest in Lithuania with a tree seedling and we also invited other companies to follow suit”, CEO of CreditInfo Lithuania Aurimas Kačinskas said. “Luckily, the most reliable companies are also companies with the highest sense of corporate social responsibility. By looking at the park we have just planted we realize that these trees are not  any less important than good financial indicators.”

For the first park of the “Strongest In Lithuania”, one of the busiest parts in the city capital was selected, namely Gerosios Vilties roundabout, through which tens of thousands of vehicles drive past every day. Residents of Vilnius living in the vicinity of the roundabout in Geležinio Vilko street, Savanorių and Laisvės avenues also come here to take walks. Until now, the area had lacked a green space and the public concern over the air quality has been increasingly growing every year.

As the newly planted park will be growing, this area will become a more attractive spot for residents, providing a pleasant shade from the sun in summer days and shelter from wind on cold autumn and winter days. According to the estimates of environmentalists, every mature tree captures up to one tone of carbon dioxide per year. Planting of trees in the busiest transportation hubs will facilitate noticeable improvement of air quality and reduction of greenhouse gases.

Many more socially responsible companies respond to the call

Vilnius City Municipality gave its green light to the planting of a new park by organizing the acquisition of seedlings, the planning of the new park and providing with the necessary equipment.

“The roundabout of Gerosios Vilties is the place in the capital which we mainly see through our car windows. To make this area more attractive and pleasant place, it desperately needed more greenery. I am very happy to see proactive business companies contributing to the creation of a greener Vilnius and would like to invite others to follow suit”, Vilnius City Mayor Remigijus Šimašius said.

More socially responsible companies participated in the planting of seedlings

The first company to respond to the call was biotechnological company Roche Lithuania. CEO of the company Rasa Jonušienė said that an active participation was the result of proactive employees and deep traditions of social responsibility. “We believe that the park we have planted together will liven up the busy place in the capital. Our contribution is just one way of building sustainable environment with simple steps”, R. Jonušienė said.

Watch the video from the tree planting exercise here.

About the Strongest in Lithuania certificate:

The Creditinfo Office has been awarding the Strongest in Lithuania certificate since 2010. This year will be the eleventh year of awarding the certificate. The Strongest in Lithuania is a recognisable certificate of business trustworthiness enjoying the longest history and is one of its kind in the Baltic states. Over a decade more than 15,000 Lithuanian companies have been awarded the right to use the certificate as a proof of a positive financial reputation. At the initiative of the issuer – the credit office Creditinfo Lithuania, this symbol of high trustworthiness is awarded to companies noted for their professional financial management, stable income, profitable operations, timely payment of taxes and no indebtedness towards their partners.

More information about the Strongest in Lithuania available at https://digital.creditinfo.lt/

The share of immunised staff in different commercial companies may vary several times, the survey by Creditinfo Lithuania suggests. According to Statistics Lithuania (SL), the least immunised retailers (from 36.9 to 52%) work at markets and kiosks. The largest proportion of immunised staff after vaccination (up to 74.7%) has been reported in pharmacies, optics and supermarkets. Among all the sectors, the least active are construction and transport companies, but this indicator may well be explained by a large share of foreign nationals on their staff list.

Jekaterina Rojaka, Head of Business Development and Strategy at Creditinfo Lithuania, says that after the Statistics Lithuania launched publication of immunisation indicators on a company level, Creditinfo followed suit and started reflecting them in its information systems, while a growing number of users look for information on immunisation of potential business partners.

It appears from the publicly available data that in companies with staff delaying vaccination the proportion of staff infected or having recovered from the virus is higher. Obviously, the analysis of recovery indicators among staff suggests that many of these people (up to 12%) are among market and kiosk retailers. Within the category, the sub-category of textile, clothing and footwear retailers stands out where the full immunity (two vaccine dozes) within this group has been acquired by 52% of staff, another 12% of staff became immune after getting infected and recovering from the virus, bringing the overall immunisation level to 64%.

In comparison to workers in supermarkets, pharmacies and optics with 75% of fully vaccinated staff, the immunity after getting infected with the virus was reported from 1 to 5% of the labour force.

The largest number of immunised staff work for the financial services sector, the smallest number – in transport companies

The analysis of companies from other economic sectors suggests that among companies with 70–100% of immunisation level, those engaged in financial activities and services take the lead with 87.1% of immunised staff. Companies at the bottom of this group are from construction (38.7%) and transport sectors (30.3%). According to J. Rojaka, a low level of vaccination there may be explained by a relatively high number of foreign staff working in these sectors, leaving their immunisation indicators outside the scope of the national statistics.

Compared to other economic sectors, extractive industry and agricultural companies are moving at the slowest pace towards the set immunisation target of 70–100%, accounting for 46.6 and 47.8% of immunised staff, respectively.

In restaurants and hotels, which had been very actively promoting vaccination among their staff, at the end of August the immunisation indicator approached to 71.5 and 71.6%, respectively. J. Rojaka notes that these two sectors have achieved the major quality progress in terms of staff vaccination pace, reporting an increase of 45 percentage points in the number of staff vaccinated in August.

Analysis of the Lithuanian construction sector

Financial and performance indicators in the construction sector reveal positive rather than negative trends. The boom in real estate emerging in the time of the pandemic has remarkably boosted the sectoral activity (during the first 6 months of this year alone the volume of constructions works grew by almost one fifth) and positively reflected in performance indicators of most of the companies. Sectoral earnings have been rapidly growing both on the domestic and foreign markets. After discounting the impact of seasonality and working days abroad, the volume of construction works is an increase of 21.5% year-on-year. The number of construction companies have been mushrooming, accounting for an increase by a third during the second quarter of this year compared to the previous year.

Some positive trends may be seen in the solvency of the construction industry. For instance, a year ago 23% of companies in this sector belonged to the high or highest group of bankruptcy risk, whereas this year the number of such companies dropped to 20%. In terms of delayed payments, some improvement may be observed too: last year the number of companies within the group of high and highest risk of delayed payments accounted for 47%, compared against 37% this year.

A number of construction companies going bankrupt has been decreasing steadily. In 2017-2020 the number of bankruptcies dropped from 366 to 163, whereas the updated statistics for this year give a solid ground to expect a further similar decrease in the number of reported bankruptcies.