“Smartphone information can be sufficient to make a credit decision” 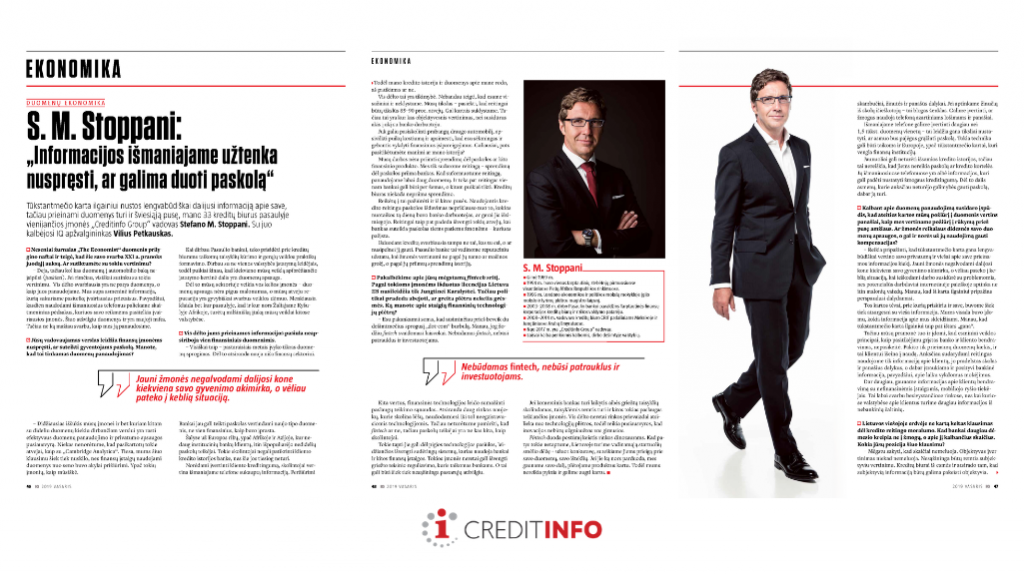 “Smartphone information can be sufficient to make a credit decision”

Millennials will eventually stop from carelessly distributing information about themselves, but accessible data have a bright side too, thinks Stefano M. Stoppani, the CEO of “Creditinfo Group”, uniting 33 credit bureaus around the world. A discussion held by IQ reporter, Vilius Petkauskas.

Recently, “The Economist” compared data to oil and affirmed that the importance of the former in the XXI century will overpower the black gold. Would you agree with such a statement?

Unfortunately, at this date you can’t pore data in a car’s fuel tank (laughing). On a more serious note, I absolutely agree with such a statement. Nevertheless, it’s not the actual data that counts, but the way it is being used. We are surrounded by personal information, that we create using various devices. For instance, by using smartphones on a daily basis we leave digital footprints, that could be used by companies for various purposes. From that perspective, data is the new oil. Nonetheless important is how we use it though.

The business that you are in charge of empowers finance companies to make decisions weather to grant credit. Do you think this is the right way to use data?

One of the biggest challenges for our company as well as any other business managing large data quantities is to find balance between effective data use and privacy protection. Nobody wants another “Cambridge Analytica” case. Must say that we are a bit lucky in that sense, because for ages data used by financial institutions have been extremely thoroughly supervised. Especially of such companies like ours.

When I worked for the World Bank, I had the opportunity to contribute to the creation of rules and formulation of best practices for credit bureau activities. I worked with several legislators, therefore I am perfectly aware of the fact that data protection is a crucial element to any law defining our activities.

This is one of the reasons why there are so few companies in our industry – data protection is not a cheap thing and reputation in our business is absolutely crucial. The slightest mistake anywhere in the world, let’s say Cape Verde in Africa, would have a tremendous impact for our operations in other countries.

The information you operate does not only consist of financial data, does it?

Absolutely. As of lately, a huge explosion of data has happened, hence new niches for the financial sector.
Banks can already grant credit using alternative data, not only financial, as it was the custom before.

In the countries outside of Europe, especially in Africa and Asia where there are fewer institutional banking clients, providers of small loans have become extremely popular. Such lenders can’t check a clients’ credit history in a bank, because the latter simply have none.

In order to evaluate a clients’ creditworthiness, lenders check one’s data collected via smartphone. Calls, messages and other such things are being evaluated. If we spot messages from debt collectors – it’s a bad sign. We can spot weather a person is using a smartphone for gambling or other activity of such kind.

There are up to 1500 data points that allows to evaluate quite precisely weather a person would be able to pay back a loan. Such technique can be used in Europe as well, especially for Millennials, who avoid financial institutions.

Youngsters may not have a full credit history, but that does not mean that they don’t need a credit or a credit card. Their smartphones contain plenty of information, which can help evaluate creditworthiness. That is why a part of the population that could not have access to credit in the past now have this possibility.

Talking of data usage, one can get the impression that future generations will consider data in a way that we consider smoking half a century ago. Will people demand better protection of their data, or perhaps compensation for usage of their data?

We have to admit that Millennials were quite careless in regard to their privacy and the amount of publicly available personal data. Young people used to share almost every glimpse of their lives without even thinking, sometimes getting in trouble when looking for a job, as potential employers discovered some unflattering images or else. I think that on the long run this generation will admit pushing the limits a bit too far.

Millennials’ parents – I count myself amongst them – were a bit more careful in regard to public information. We were always interested and aware of the information that was spread around about us. I think that on the long run the young generation will say “enough”.

Nevertheless, our industry is interesting in a sense that the basic principles of operation, such as trust-based bank and client communication, remain unchanged. What has changed is the amount of data available and this – to the benefit of the client. In the past, while establishing a scorecard, we only used information about the client, ones defaulting debts and alike, while now we add positive banking information, such as payments effectuated on time.

More to that, we receive information about clients’ communication with non-financial institutions, mobile-operators. This is very important in developing markets, because in some countries we have only information on clients from non-banking sources.

In the Lithuanian public space, the morality of credit scoring has often been questioned, referring to banks that pay attention to numbers rather than the individual behind them. What is your take on this?

I like to say that numbers don’t lie. An objective assessment never lies. It would be unfair to refer to a subjective evaluation. A credit bureau has been set-up to change subjective information into objective. That is why my credit history and data about me show weather I am trustworthy in that sense or not. There is a probability though. I don’t try to affirm that we are all-knowing and never make mistakes. Our goal is to make sure that our scoring is accurate in 85-90% of cases. There might be inaccuracies, however such scoring is way more accurate than relying on a bank’s employee that a customer meets face-to-face.

I can for instance borrow a friend’s fancy car, put on a great suit, pretend I am successful and can meet financial commitments. Would you eventually trust me or my credit history?

Our job is not to make decisions on credit or any other financial product. We only setup a score, while the decision on granting a credit or not is made by the bank. In order to create a score, we use a huge amount of data. A same score for one bank can be too low, while for another bank – be just great. A credit bureau does never make a decision.

We should take a look at it from another perspective as well. While using a credit score, the granting of credit does not depend on the mood of an employee at a given day or weather one has had enough sleep. Scores also allow to avoid cases when a bank give away loans to a same person that they know well. While granting credit, the most important is not who you are, but rather weather you deserve to receive it. At the World Bank we called this a reputational collateral, when people are evaluated not according to the beauty of their house or car, but according to the history of decisions they have taken.

Let’s talk about the field that you are fond of – fintech. According to the licenses given to such companies, Lithuania ranks just under the UK. The politicians, however, start to doubt weather fast expansion does not represent a threat. What do you think of the rapid expansion of financial technologies?

I am old enough to remember the .com bubble, which exploded almost two decades ago. I think that the word fintech is used too freely. If you are not a fintech, you won’t be attractive to investors.

On the other hand, financial technologies have permitted to decrease service costs. Many new-comers have popped-up, who borrow funds using technologies which did not exist before. However, we should not forget that fintech or not, loan providers are none else but lenders.

They can become such due to cheap technology offering, allowing to avoid complex systems used by banks or other financial institutions. Such companies can often avoid strict regulations, applicable for banks, which can be a little bit unfair in regards to the latter.

If a commercial bank has to stick to dozens of strict rules while giving credit, rules shall be applied to other companies providing such or similar services. Nevertheless, market supervisors are often lagging behind technological advance and balance is therefore needed so that innovation is not killed at initial stages.

Fintech gives market dinosaurs an impulse to change. In order not to become one, we have a so called star-up Sandbox here in Lithuania and instead of competing, we provide them access to our data and resources. If they sell something, we get our share and develop products together. We don’t need to argue, we can grow together.